When I was born in 1973 my brother was going on ten. Mom & Dad owned and operated a small 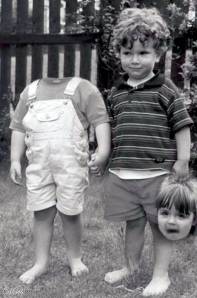 business in Oakland, California. We lived in a part of the San Francisco Bay Area that was considered more of a farming community at that time. Clean, quaint, friendly … normal. My Dad would commute the 25 miles or so back & forth everyday and Mom stayed home to take care of me and my brother & do the bookkeeping for their company. My Dad was what people consider a work-aholic. He was also an alcoholic.

As I grew up I watched my family change like all families do. And just like most families, as my brother became a teenager, my parents had a hard time. He’d push and they’d pull. My Dad drank more. They all fought more. If I stayed quiet, I’d go unnoticed. When my brother got his driver’s license at sixteen he was given a black Trans-Am. I still remember the night he got it. He sat out in it in the driveway til I fell asleep inside. I can still hear my mom yelling out the front door to him to ask if he wanted his blanket & pillow. He totaled the car within a couple months. But mom made sure he had a replacement right away. Dad was against him getting a new car but my mom made life pretty miserable for anyone near her unless she got what she wanted. Dad always gave in eventually. So the next car was totaled. And the next. In two years my brother wrecked 8 or 9 cars. Every time it was the same, the new car would end up in a ditch, my brother would cry the blues to mom and he’d get another new car. My Dad just drank more. His trips to the bar after work would last longer & longer. He started leaving work early now & then to go to his bar. I watched my parents struggle with him. He was very passive aggressive and obviously having struggles of his own. I loved my brother. I looked up to him. He despised me. From the day I was born – he hated me. At the time I didn’t know why he was always so mean to me. I couldn’t understand why he wouldn’t let me sit by him and watch TV with him. Or why when he & I would eventually interact he’d do cruel things to me. I couldn’t understand back then why my Mother never did anything to help me. My Father helped though but that only made my brother more hateful. He wanted my Fathers unconditional acceptance but he never got it. I had it. My Father & I had the strongest bond. Just like my Mother & my brother had. But I was punished, degraded, despised, mistreated because of it. I accepted my brother, no matter what.

When I was 7 or so, I found an essay he had written in school and read it. It was about me. I read how I was his pet-peeve. How he hated me. My Mother brought that essay up at dinner that night. He had gotten a decent grade or something so she decided to read it out loud for us. When she came to the parts that were the most hurtful to me, she laughed with my brother about what he had written then making fun of me when I started crying. Then the 2 of them would tease me for crying. Dad was drunk. He just ate. They laughed. I hated them and can see their faces as I write this and it makes me sick.

When I was 8 we moved from the only home I had ever known to a sprawling, seven thousand square foot house that my Mom & Dad designed and had built on fifteen acres they owned less than a five minute drive from my first home. My brother was eighteen. He had been to jail already. Wrecked a half-dozen cars my Dad bought him. Every night was the same. My Dad would come home late from work, completely marinated in Seagrams 7. He’d be so happy to see me when he came in. And I was so happy to see him, despite all the horrible things my Mom would say about him all day long. He’d come in & hug me first, always. Then make his way into the kitchen to greet my mom. We’d all sit down together to eat shortly after. Inevitably my brother would piss my Dad off in some way or another during dinner and dinner would end in some sort of eruption.

My brother & I eventually took over the family business. He was the labor and management and I was the books. Mom & Dad taught us everything we needed to know. At one point we were all equal partners in the Corporation. Then my Dad got sick, had a stroke and couldn’t work anymore. He died several months after his stroke and within a few months of his death my brother bought me out of the family business.

It was such a relief to be free of the burden of having to work with my brother the rest of my life but it also kinda hurt that he’d done that to me.